The first people arrived in Ireland about 9,000 years ago (around 7000 BC). We now call them Stone Age people because they used stone tools for their farm work and for hunting. We know about these early settlers in Ireland because many of their tools and weapons survived and have been found by archaeologists.

These first settlers in Ireland made weapons and tools out of a sharp stone called flint, especially axe-heads. At first they lived mainly along the coast of Ireland or near rivers because they were hunters. They mainly ate berries, fruit, and wild animals and moved from place to place. From about 3500 BC the Stone Age people began to clear away forests to make farmland.

The later Stone Age people or Neolithic people in Ireland were farmers. This later Stone Age period is from about 4000 BC to 2000 BC, which means that the first farmers lived in Ireland about six thousand years ago. These farmers were able to cultivate land and raise cattle.

Stone Age Tombs
We know that the later Stone Age people had great respect for their dead because they built large stone graves and monuments from about 4000 BC. Some of these tombs are very large and are called megalithic tombs or dolmens. Many of these can still be seen in Ireland, for example in Glencolmcille in Co. Donegal. One well known dolmen in Co. Clare is called Poulnabrone. It was built around 2,500 BC and was found to contain the remains of about seventeen adults and sixteen children. Stone Age farmers often decorated the stones on their tombs. An example of this can be seen at the large tomb in Newgrange.

The Celts were a group of people from the mainland of Europe. It is not exactly clear when the Celts first came to Ireland as they did not leave written records, however many historians think they came sometime about 300 BC. They settled all around the part of the world that we now call Europe. From about 450 BC to 250 BC, the Celts were the most powerful group in the area of Europe.

Warriors
The Celts were fierce warriors and they often fought against other powerful groups such as the Romans. They brought many changes to Ireland as they knew how to make both weapons and tools from iron. Iron weapons were much stronger than bronze weapons and so the Celts could defeat other peoples they encountered in Ireland. Despite the many changes the Celts made, they left the existing ancient stone monuments in place.

As iron was introduced to Ireland at this time, we call this period the Iron Age.

How do we know about the Celts in Ireland?
Archaeologists dig underground to find evidence of how people lived long ago. Ireland has lots of old ruins and mounds of earth which hide ancient sites. Archaeological remains like pottery, bones or tools are known as artefacts. They are found in the landscape and tell us a lot of information about people like the Celts. For example, many pins, brooches and items of jewellery have been found which show us not only how the Celts fastened their clothing but also that they were skilled at making beautiful designs on metal. Wealthy Celts wore gold bracelets as well as collars known as torcs. The léine was the long tunic worn by a Celtic nobleman. A belt called a crios was usually tied across the tunic and a woollen cloak called a brat was often worn over it.

The Celts tell very interesting stories to their children like “The Children of Lir” and “The Story of the Bird”.

Ireland’s Early Inhabitants made very interesting discoveries during their time. 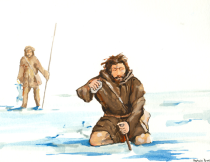