We learned lots of new and interesting things during October!

Our students of the month for September and October, Kayla and Daniel, got the chance to write about what they enjoyed learning about during October using our class computer and Google Docs.

In October we learned about the Vikings. We used the laptops to research the vikings on the BBC website and watched videos about how they got to Ireland from Scandinavia. 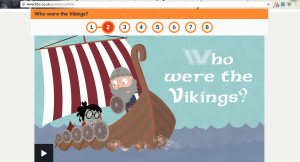 Viking boys went hunting through the woods with bows and arrows they also go fighting and help on the farm. Viking girls have royal pet cats they can weave beautiful cloth.Viking fathers chose their daughters husbands for them. They were usually married by the age of fifteen. Viking houses were built from locally available materials, such as wood, stone or turf.The floors of houses were dug out below ground to keep the house warm.Vikings kept their animals in their houses, to protect them from bad weather.The humans lived on one end and the animals lived at the other.Vikings had their own sort of alphabet.Their system of writing was called runes.Runes tuck metal, jewellery and weapons.

When we were reading with Ms Daly we learned lots of new things like predicting.Predicting is a guess and it does not have to be a 100% right.
In english we did lots of different recounts, we particularly enjoyed writing a recount about “A Witches Washing.” It was about a witch who broke into our classroom and hung her washing up.
The end.

By Kayla and Daniel.